A day in the life

This exhibit was researched and written by Eliza Carroll,
​ a senior at Greenwich Academy in Greenwich, Connecticut, who loves spending her summers on Shelter Island.
"Shelter is a man’s desire, lifelong, world-wide.
​He seeks shelter from the heat and from the cold,
from the wind and from the rain,
from besieging troubles and from afflicting cares."
The Gilded Age was a period of American history between 1870 and 1890 that came about due to economic growth and industrialization especially in the Northern States. Likewise, in Shelter Island the period was also one of new growth and prosperity. In his comprehensive history of Shelter Island, Ralph Duvall, stated that “in the year 1871 a transaction took place that eventually was to work a great change in the place and alter its character for all time”.  Shelter Island’s natural beauty and promising geography attracted a group of men from Brooklyn who staked out land to begin their summer resort, later known as The Prospect House/Hotel. The next year in 1872, 200 acres of land in Dering Harbor was bought with similar intentions of commercializing the previously untouched land and and eventually was devoted to The Manhanset Hotel. The Heights, a methodist community, also grew rapidly during this era with 70 cottages built between 1872 and 1880. Clearly demand for a summer retreat was high.
Between the growth of the hotel industry and the flourishing communities in the Heights, Hay Beach, and Montclair Colony a group of summer guests and residents formed in parallel to the full-time communities already established on the Island.
Only slightly later in the 1890s, dubbed the “gay nineties” on Shelter Island, the summer economy  was at its peak. Hotels like The Pridwin and The Manhanset advertised an unrivaled social life, and endless activities including fishing, boating, yachting, bathing, dancing, and tennis as well as “ONE HUNDRED MORE DAYS OF SUNSHINE PER YEAR” in their annual catalog. They advertised the Island as having “received every touch of beauty and luxury that taste and wealth united could bestow”. Summer residents traveled from all over the northeast and even further. A large contingent came from Brooklyn and New York.

The following exhibit follows the Stoutenborough family, and what their life might have looked like during a summer on Shelter Island at the turn of the century. 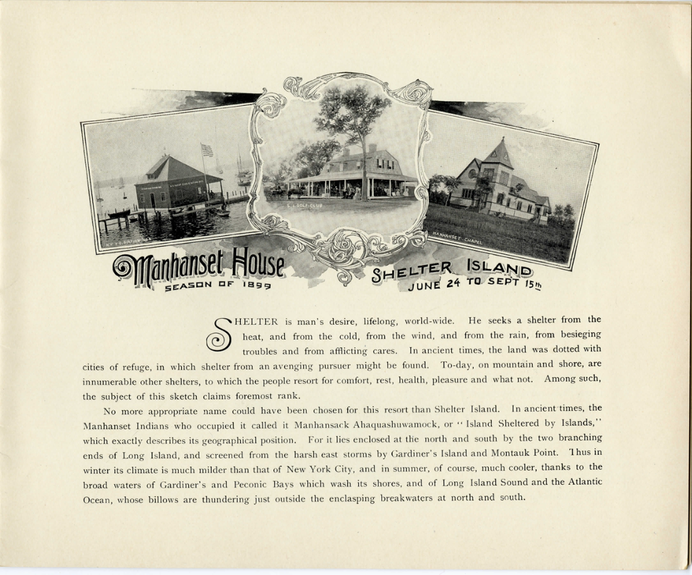 From the Shelter Island Historical Society archives.
An excerpt from The Manhanset Hotel’s catalog circa 1899.
​The Manhanset Hotel attracted a “wealthy class of people, especially yachtsmen” according to Rev. Jacob E. Mallmann in his book Shelter Island and its Presbyterian Church.
“The past week on Shelter Island has been one of unusual gayness. The hotels are well filled and card parties, sailing parties, tennis and bathing furnish plenty of excitement and interest to the crowds of young people who throng the place.”

Summer always began with the necessary travel to Shelter Island. As steam engines became more mainstream, a train was built from New York to Greenport, which took only two hours. Following that, the ferry would bring passengers from either the North or South side onto the island. The Stoutenborough family arrived via the North Ferry, which at the time took the form of a launch called “Reba”. In addition, groceries and special food items were ferried over to summer residents using the launch. Once on the island, either carts pulled by horses or the occasional car brought the Stoutenborough to their final destination. 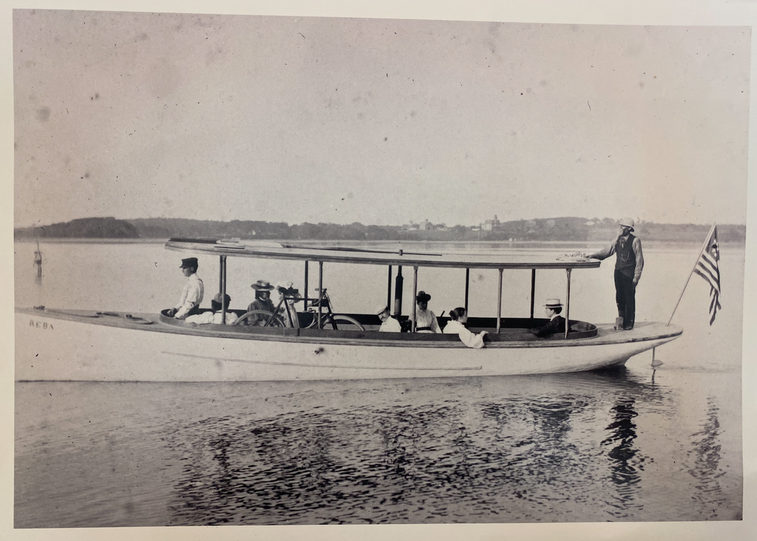 From the Shelter Island Historical Society archives.
The Reba pictured in 1895. Passengers are seen dressed up in formal dresses and hats on their journey to Shelter Island.
The Stoutenboroughs owned a house in the Heights, a vibrant summer community designed by prominent architects including Frederick Law Olmstead. The house is in the Victorian gingerbread style, with a prominent peaked roof and ornate wood detailing.  Time was spent in many different ways: the Stoutenboroughs are seen sitting on their porch where they could enjoy the company of neighbors and the view of the Island. Families and friends also often promenaded on the Willow Walk near The Prospect House/Hotel which was lined with traps and surreys. According to the Shelter Island newspaper, a group of young ladies who had just moved into “the best society at the heights” even spent time planning a party in a local park over several weeks but eventually abandoned their event due to a lack of organization. Summer in the Heights inspired a creative rotation of events and social gatherings that connected and occupied many. 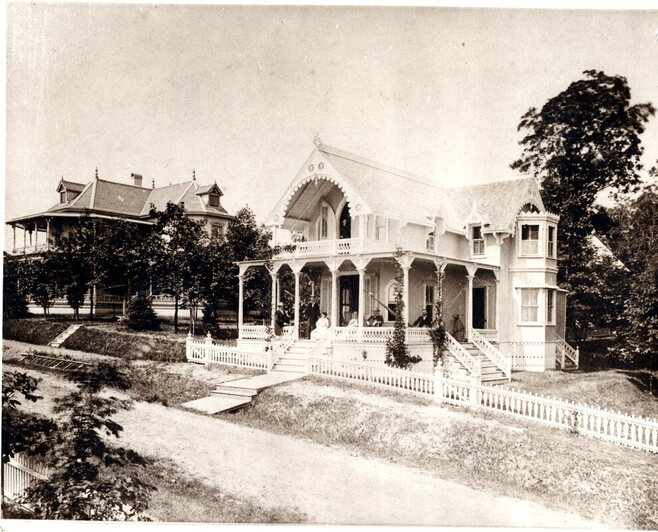 From the Shelter Island Historical Society archives.
The  Stoutenborough House, circa 1899. The porch is outfitted with a hammock and a bicycle, a favorite mode of transportation once on the island,  is visible in the back.
Sailing was an integral part of summer on Shelter Island. The Stoutenborough family would have belonged to the Shelter Island Yacht Club which was founded in 1886. Weekly races held by the Sharpie Club were an anticipated part of the week and always highly documented in the newspaper. The Yacht Club also always hosted an annual Regatta Day which brought many out onto the water. Spectators would also gather on docks to view the races. For the less competitive, sailing parties were a fixture on the social scene. Families often sailed to Rose’s Grove with a picnic at night or to take part in the clambakes on the beach.
From the Shelter Island Historical Society archives.
Regatta Day,  August 1889.
Another popular pastime on Shelter Island was golf. Not only were informal matches a regular occurrence but groups from Shelter Island would also face off against teams from the Maidstone Club, located in East Hampton, several times each summer. Following the weekly tournament on Saturday mornings, was the ever-popular “Golf Tea” which was organized by ladies like Mrs. Stoutenborough. The event was described in the newspaper as “a new star  on the social firmament" and was an anticipated event as it allowed time for the residents of the Heights, the hotel guests and as the hotel patrons to mingle and converse. 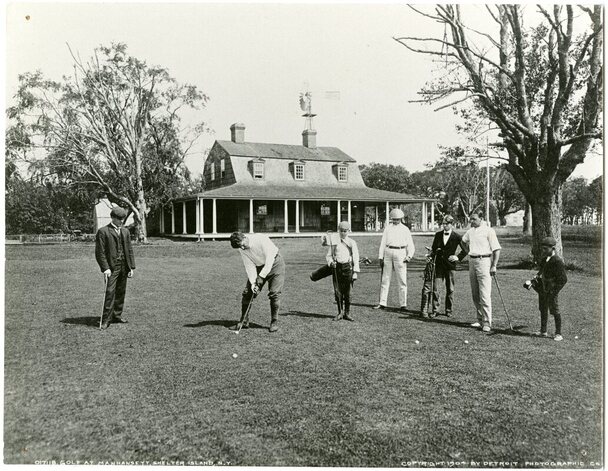 From the Shelter Island Historical Society archives.
Friends are pictured playing golf at The Manhanset House golf course in 1904.
Another popular part of the summer on Shelter Island were days spend at the Heights' Beach Club Bathing Pavilion. The Stoutenboroughs could meet friends to swim and kayak; the Pavilion also hosted tea and music performances overlooking Dering Harbor Bay which drew an even larger crowd.
From the Shelter Island Historical Society archives.
The Beach Club's Bathing Pavilion was a popular place to meet friends and watch the boats in the harbor, including J.P. Morgan’s yacht which was anchored near Shelter Island in 1904.
Nights on Shelter Island were equally eventful to the rest of the day. Parties were hosted on yachts offshore with cannon salutes and fireworks, which solicited parades on the docks on shore in response. Additionally, Saturday nights were usually devoted to dancing. On occasion, formal “Germans” were hosted, both for adults and for children, where the dancing would take place to the sound of music by Strauss and Waldteufel, and played by an orchestra. The Prospect House/Hotel also hosted a concert every Sunday night for its guests that included instrumental solos, songs, and orations. The newspaper often recorded praise for the orchestras and musicians who came to play, whether depending on the audience the performances varied from full or humor to serious and sentimental. 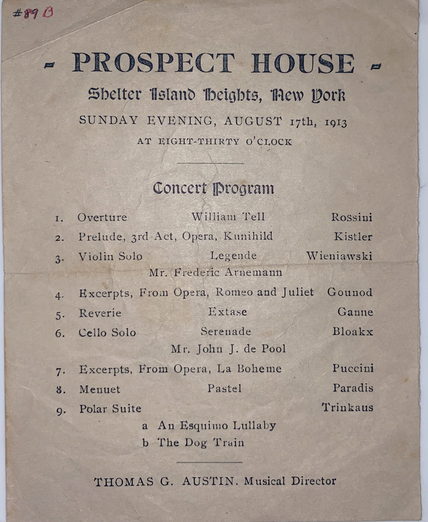 From the Shelter Island Historical Society archives.
One of the many programs from the weekly Sunday evening soirees held at The Prospect House/Hotel for their guests.
Ultimately, at the turn of the century, the hospitality industry had become a main part of the fabric of Shelter Island. Between the many hotels and the summer communities there was a large population of people who enjoyed Shelter Island during the summer months and then left as the weather turned cold. The experience of the Stoutenborough​ family is not universal to all on Shelter Island during this time period, but does provide a glimpse into what it might have been like to experience the magic of Shelter Island at this particular moment in history. And while aspects of daily life have evolved over the past one hundred and twenty years, the core pastimes and activities have remained the same, clearly beloved by generations.