​The DNA of Shelter Island

The following exhibit was created by Shelter Island School sophomore, Leonardo Dougherty, as part of the Robert D. L. Gardiner Foundation's Young Scholar Award.
Title: People rowing, clamming, crabbing, and catching lobster in Crab creek
Circa: 1906
Given By: Alex Paul
When I first saw this postcard I recognized myself doing the same thing. My grandpa, sister, and I would take my grandpa’s dinghy and clam rake (or just try our luck with our feet) and go out to Coecles Harbor, and Crab Creek like the people pictured above and gather as many clams as we could. I was always excited when my grandpa said he was making baked clams, They were famous in my world, and perfect with a squeeze of lemon. 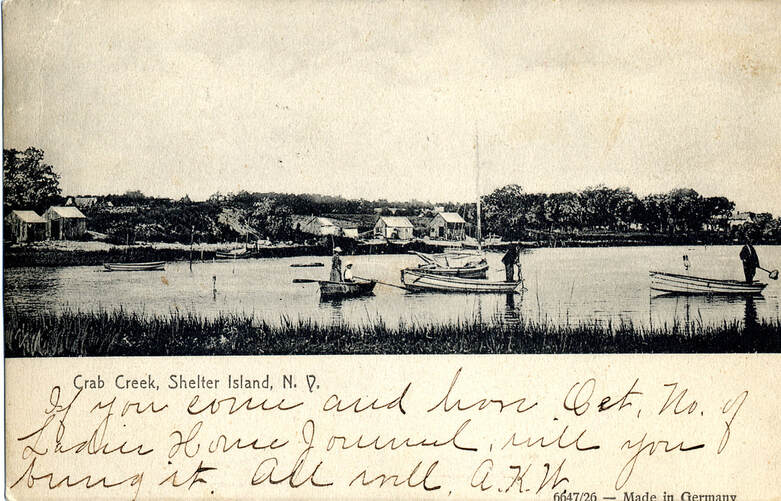 Title: Clam rake basket
Circa: Unknown
Given By: Donor unknown ​ 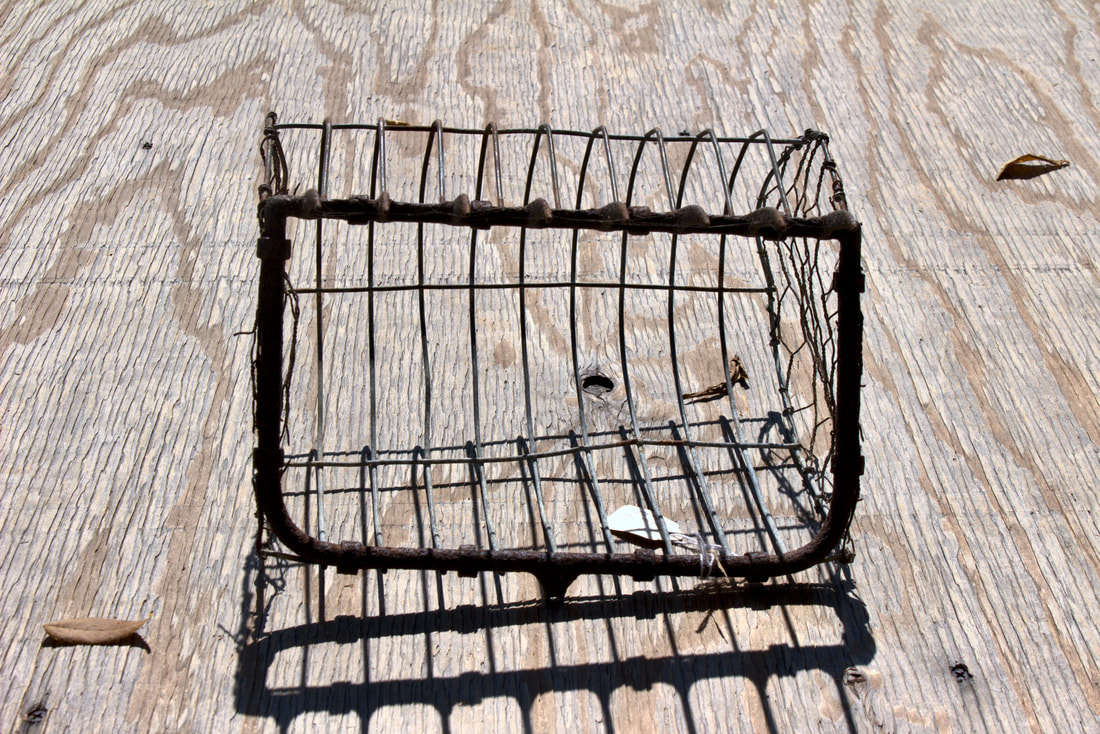 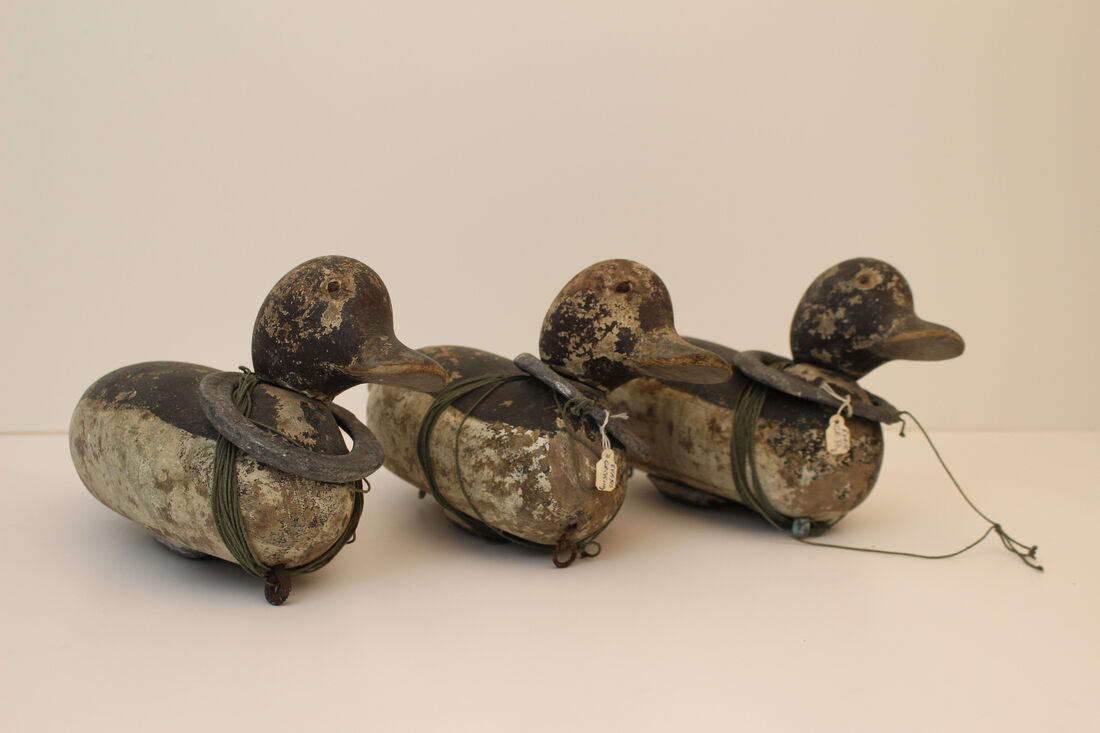 Title: Eel pot form
Circa: 1930
Given By: Donor unknown
Supposedly belonged to Abraham Schaible who was a fireman who helped put out the fire at the Prospect hotel. He met his wife at goat hill sledding and were together for 60 years.​ 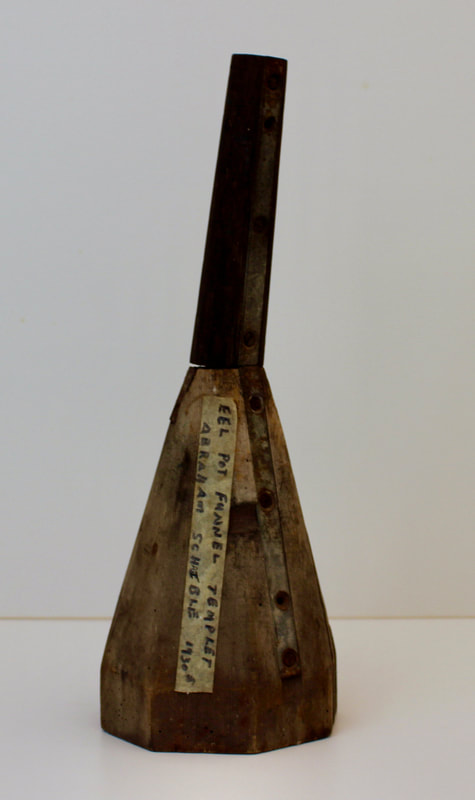 Title: Eel pot
Circa: 1900
Given By: Mrs. Rosemary Lucas
An eel pot made by Isaac Downs ​ 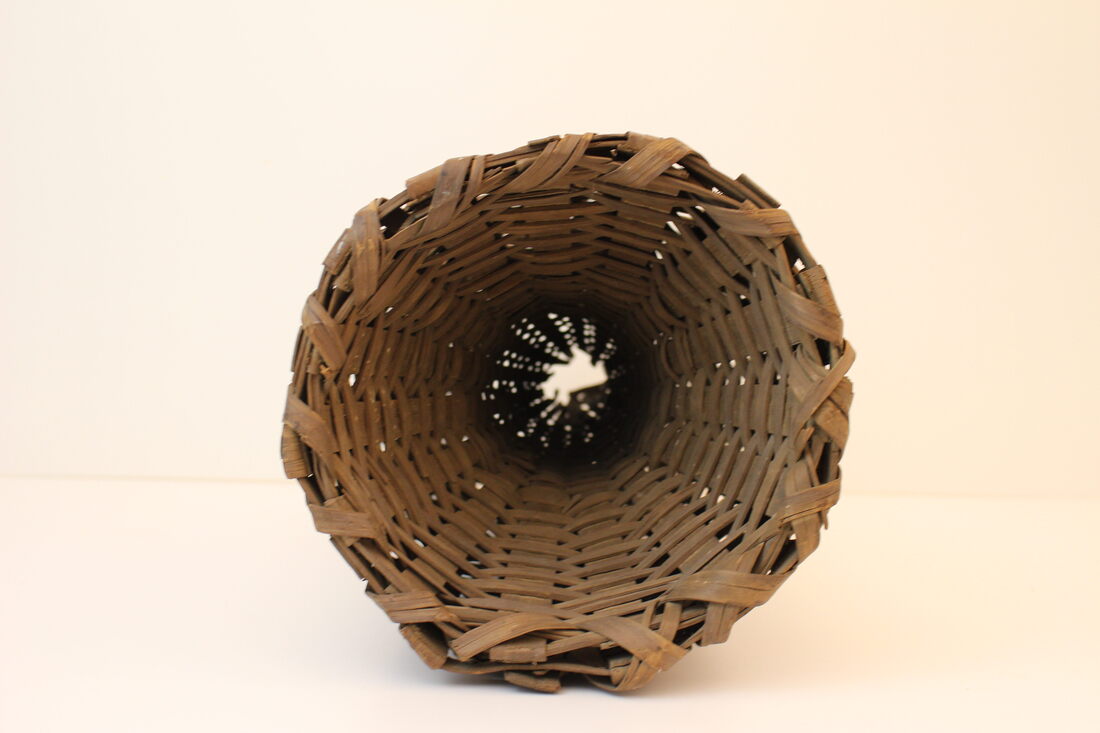 ​Title: Henry Sherman with his catch of the day
Circa: 1940
Given by: Edith Daniels
Fishing is something that you can’t go without on Shelter Island. Catching snappers, bluefish, striped bass, and porgies right from the shore. When that fish hooks up and you know you have something it brings an involuntary smile to the face. The annual snapper derby is one of my favorite days on the Island. It's when Island fishers hurry to get their lines in the water and catch the fish of the day. This fisherman looks like he could be in the snapper derby from 1940 and have maybe won it! 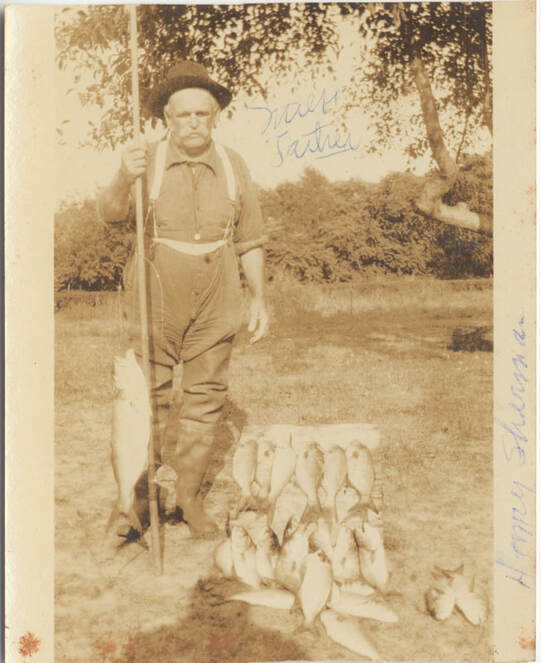 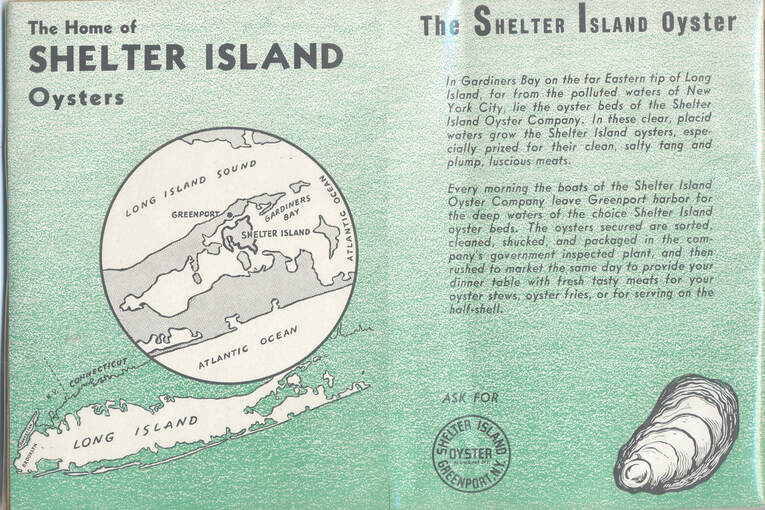 Title: Lobster trap
Circa: Unknown
Given By: Donor unknown ​ 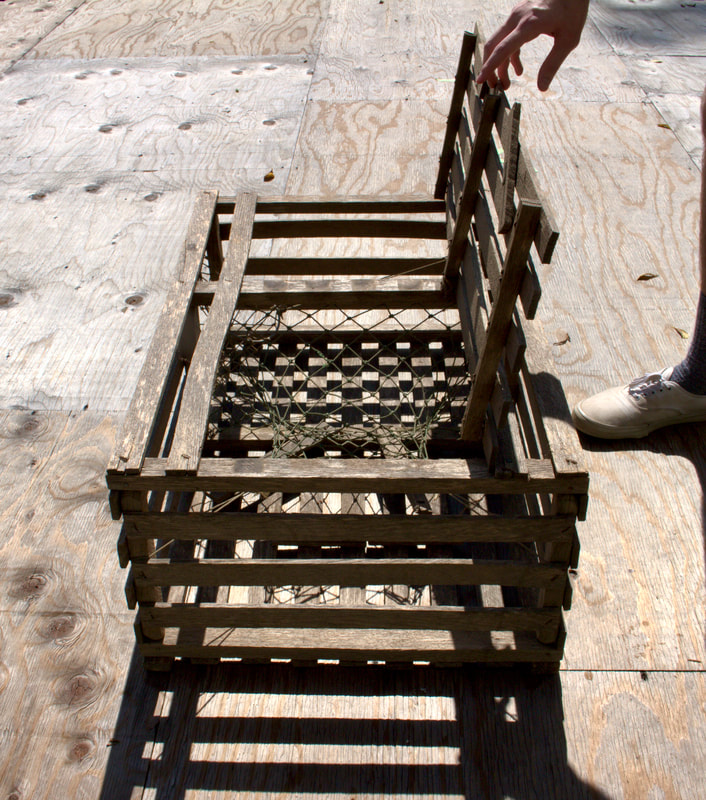 Title: Photo of duck hunters
Circa: 1930
Given By:  Louse Green
Hunting has long been part of Shelter Island culture. From the Manhanset people who hunted all throughout Shelter Island, to Mashomack’s fish & game club which sported pheasant, duck, deer and occasional fox hunt. Hunting is still prominent today especially with the notorious deer of this island. 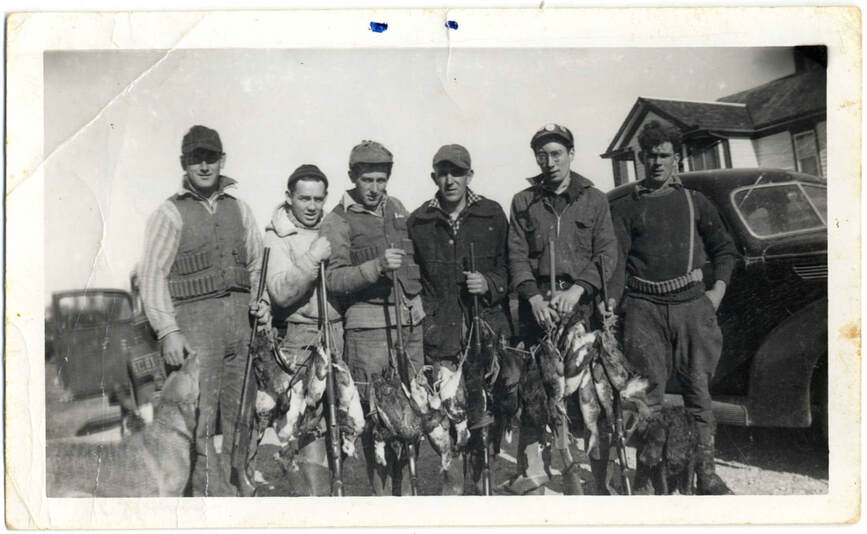 Title: Mashomack Preserve Base Map
Circa: 1979
Given By: Shelter Island Historical society
One third of Shelter Island is a stunning preserve called Mashomack with numerous trails to hike upon. With animals including osprey, painted turtles, piping plovers, great blue herons, foxes, deer, and even a bald eagle. The land was originally the Manhansett peoples who were the indigenous tribe of shelter island but, in 1653 the Grand Sachem or chief named Pogatticut of the Manhansetts deeded the land to Nathan Sylvester who built the manor house and whose son sold the land to William Nicoll I. His family owned the property for over 230 years. It was almost developed, but thanks to the stock market crash of 1929 it never happened. It was then leased to multiple fish & game clubs when another development plan popped up, but fortunately that also failed. Shortly after, The Nature Conservancy took hold of the property and made it what it is today. It is one of Shelter Island’s greatest treasures. 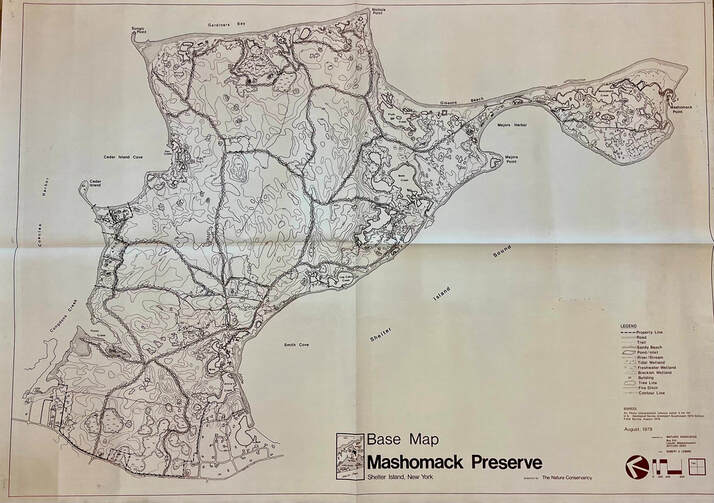 ​Piece Title: Manhanset House Postcard
Circa: 1906
Given By: Renée Barletta
The Manhanset house was a grand hotel built in 1874 off of Locust Point which is now Dering Harbor. It was over 700 feet long and at most five stories high and boasted its own ferry and steamboat pier, 18 hole golf course, tennis, swimming pier, casino, dance hall, and more. It held esteemed guests like J.P. Morgan and other wealthy persons. Unfortunately It was struck by lightning in 1910 and was destroyed. Hotels today like the Pridwin and Sunset Beach are also temporary homes for the rich and famous hosting exclusive events and more. 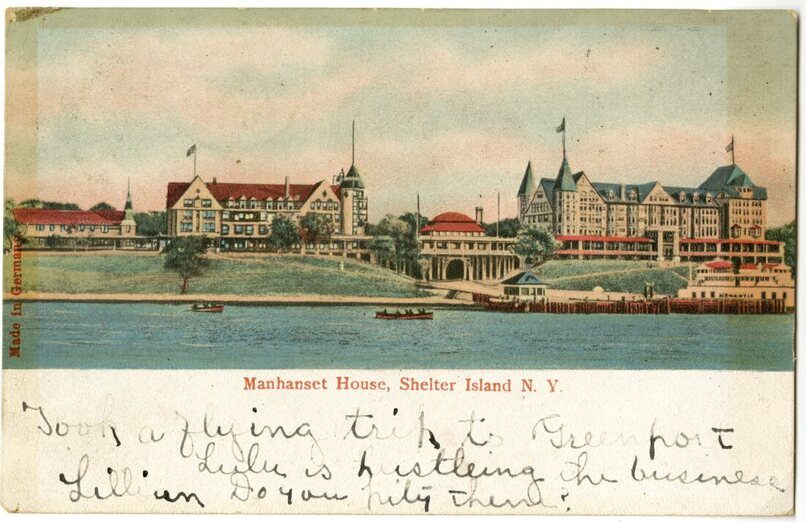 Title: North "Ferry Landing" Postcard
Circa: 1910
Given By: Renée Barletta
The ferry is one of, if not the most famous sight on the island. It has been one of two forms of transit to Shelter Island (the other being by air), taking passengers and products to Shelter Island from all parts of the world. Waiting on the ferry line, having to buy tokens when walking across, or just missing a ferry and having to wait for the next one, although not that long it’s an inconvenience but an enjoyable inconvenience. One that makes up Shelter Islands DNA. The South Ferry, connecting to Sag Harbor also shares these enjoyable inconveniences but I wouldn’t have it any other way. A ferry ride can have some of the most beautiful views. Still and  tranquil dawns to cloudless high noons to vibrant melting sunsets. There is always another ferry.  ​ 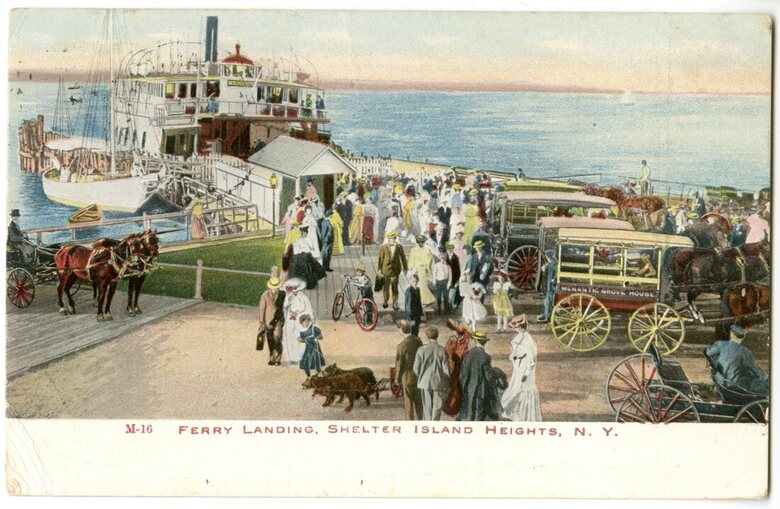 ​Title: Bridge Street Postcard
Circa: 1890
Given by: Shelter Island Historical Society
​Bridge Street is the heart of Shelter Island and it has gone through many changes since the time of this photo. Coming right off the ferry into the hustle and bustle of Shelter Island there is the Chequit Inn which has been around since 1872, the Pharmacy, Stars cafe, and the Post Office. Then take a left down Bridge Street where you will find the famous Dory, Piccozzi's, the only gas station on shelter island, Marie Eiffel, Bliss’s, and Jacks. Bridge Street has everything you need for a day on Shelter Island. 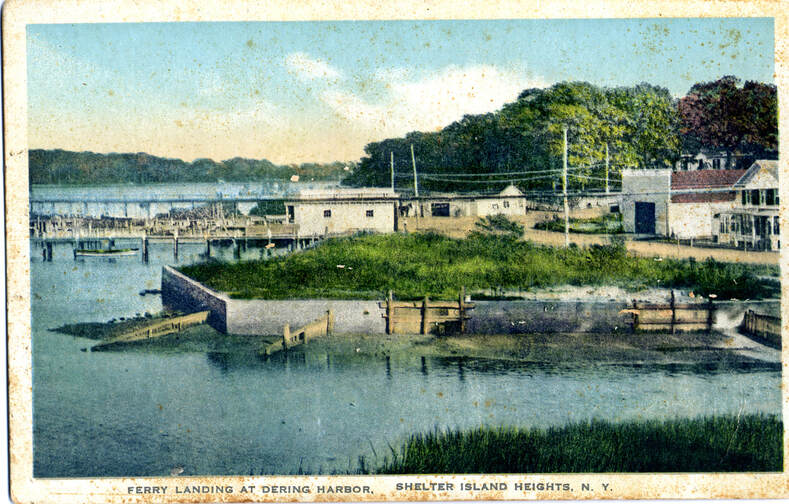 Heights Pharmacy Prescription Book
Circa 1912- 1925
donated by Paul Disch
The solid wood backing of this book shows the how much it was used, dense with prescriptions of the entire Island from the years of 1912 to 1925. whatever remedy you needed the Pharmacy could get it. The book is filled with each prescription who it was given to, how much was given, how much they paid, and sometimes how to take it. 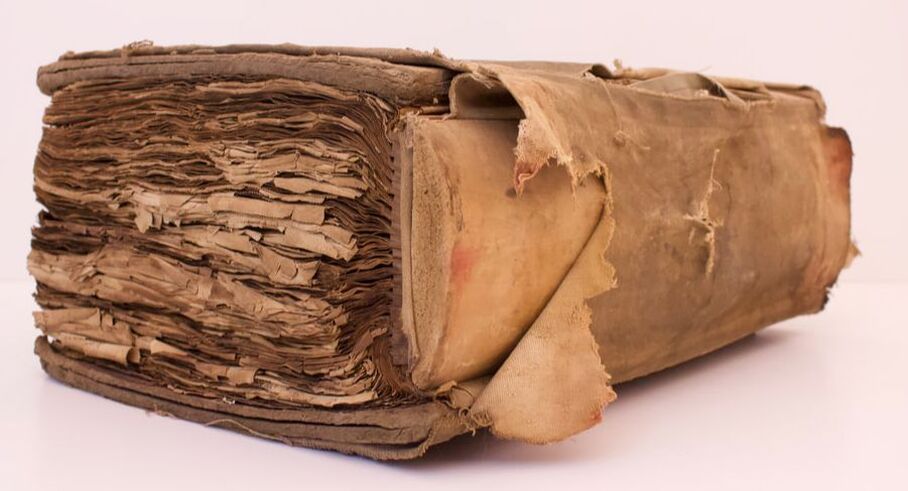 Title: Gardiner's Bay Country Club Postcard
Circa: August 27 1971
Given By: Nancy Marie King
Although I Haven’t spent much time golfing, it is a pleasure. The game itself, the view of the course, the food, and the people. Golf is a game for every age. I saw various ages from seniors to children. Everyone teaching each other and pushing their talent in the game, In informal rounds and annual competitions, Golf is for everyone. 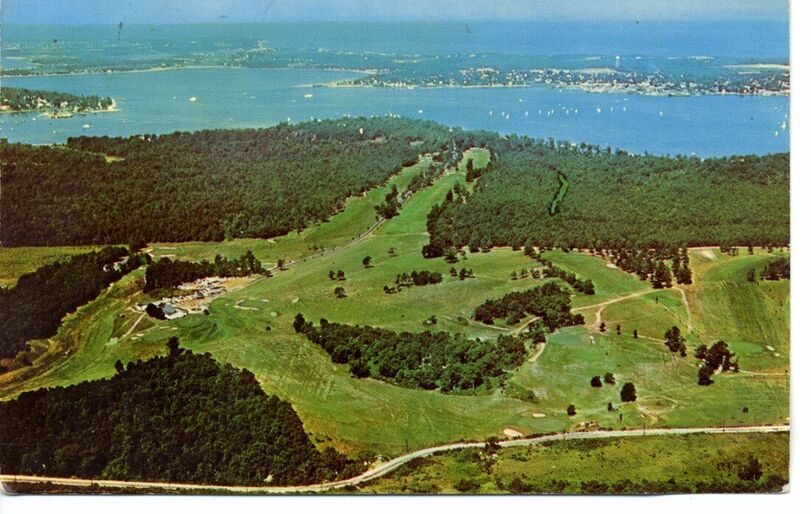 Title: Two women posing with bikes
Circa: 1900
Given By: Shelter island historical society
​​Biking, though I imagine must be much harder in the clothes the women are wearing above, is an excellent way to get around. Not just to get to the destination but to experience the ride there. When you bike you notice more things, the sounds and sights of your surroundings, the feel of the wind against you and the road your on. In a car none of these things matter but on a bike the trip gets a lot more interesting. 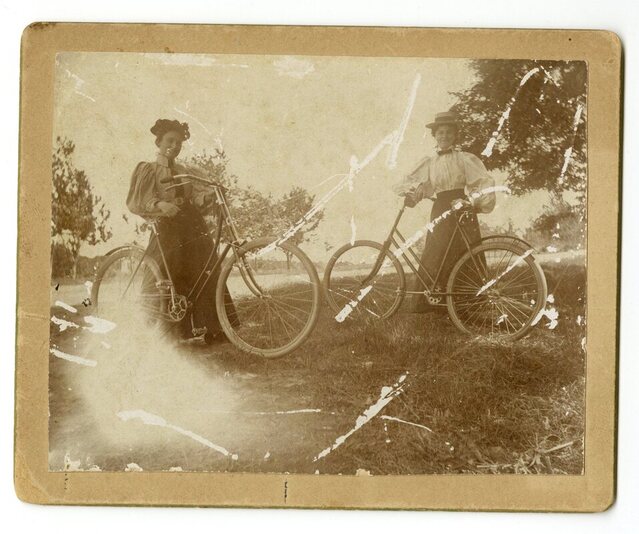 Title: Shelter Island Yacht Club postcard
Circa: 1910
Given By: Shelter Island Historical Society
As I look at this photo, I look back on time and try to imagine what Dering Harbor would have looked like filled with these boats. The regattas, the shipyard, and restaurant. Men and women boating in style. 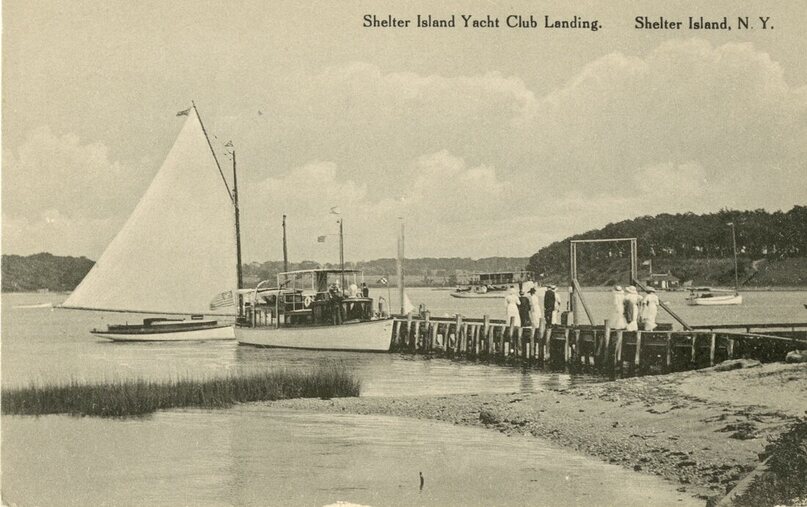 Title: J.P. Morgan's Steam Yacht, "Corsair”, off Shelter Island
Circa: 1904
Given By: Elbert Nostrand Carvel
From 1904 to today every year mega yachts almost naturally come to Shelter Island. From tall ships to massive motor yachts, taking their tenders to shore and enjoying the day on Shelter Island then going back to relax on their boat for the night. Shelter Island can’t help but to draw in these yachts. 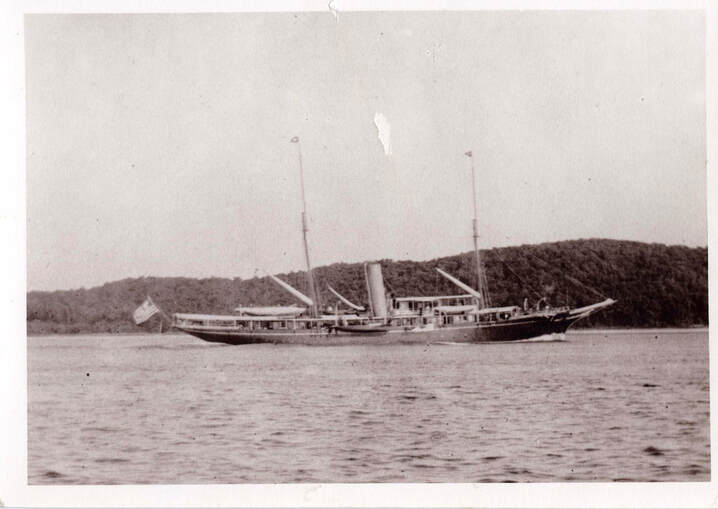 Title: Mrs. S.B. Eggleston & Isabel Eggleston at Bathing Beach Postcard
Circa: 1917
Given By: Rev. A.C. Eggleston
It's easy to see why this kid did not want to leave the beach. Shelter Island has some of the most beautiful and refreshing waters in the world. Relaxing on the beach with views of bluffs, boats and surrounding land. Though the attire is different, people now and then enjoy the beaches just the same. 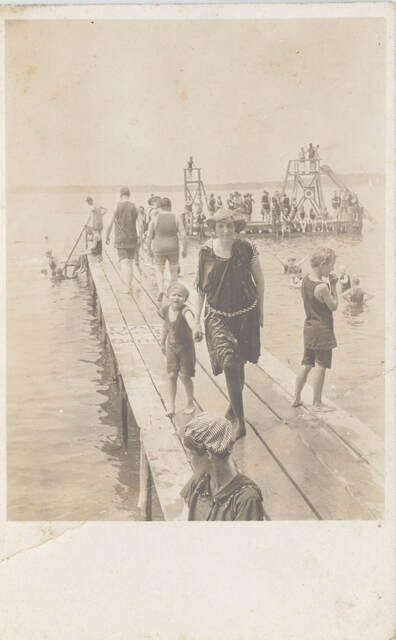 Title: Pridwin Hotel Postcard with Water Skiers Postcard
Circa: 1965
Given By: Nancy Marie King
Water skiing is a popular thing to do on a beautiful day like the one pictured. I often see wakeboards, tubers, and water skiers going by Crescent Beach, and their cheers when a friend gets up on a wakeboard for the first time or something alike. The rush when you're gliding across the water at what feels like tremendous speeds is like no other, and Crescent Beach has always been home to that. It also provides exceptional entertainment for the more relaxed beachgoers. 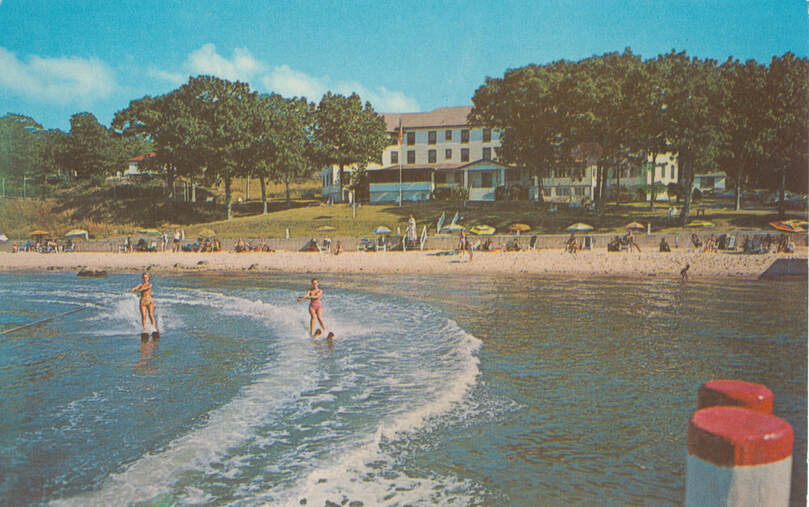