​Piece Title: Sylvester Manor Windmill
Medium: Oil on Canvas
Dimensions: 10.5 in x 12.5 in
Date Created: 1937
Given By: Bill Price
Commissioned by Cornelia Horsford to be given as a wedding gift to Vera Burns Anderson. Set in a gilded wooden frame. Walter Cole Brigham captured the windmill that had sat on the Sylvester estate since 1926 as it stood surrounded by stacks of hay on a cloudless day. 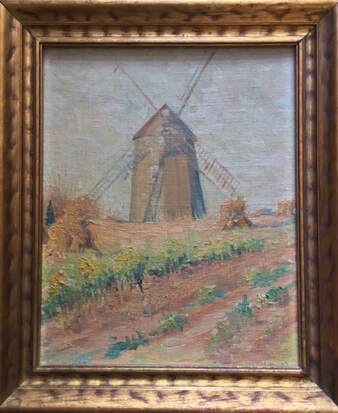 ​Title: Osprey Nest
Medium: Oil on canvas
Dimensions: 4.5 in x 3.5 in
Date created:
Given by: Julianna Behringer
Another piece in Walter Cole Brigham’s miniature series, this 4.5-by-3.5-inch canvas captures much more than its size would imply. An osprey pole crowned with a nest, a dark smudge that may be the title bird’s wing, a bright blue sky, and a quiet, rocky beach are the subject of this impressionistic painting in quintessential Walter Cole Brigham style. A constant of Shelter Island springs and summers, ospreys and their nests dot the coastline, often sitting atop poles such as the one captured in this painting.

​Title: Thorne Cottage
Medium: Oil on canvas
Dimensions: 4.5 in x 4 in
Date created: Early 1930’s
Given by: Irene Parker
Mrs. Charles Thorne gave this painting of her home which sat on Route 114 on Shelter Island to Irene Parker who generously donated it to the Shelter Island Historical Society. A miniature of the Thorne family’s cottage, the artist caught the house and garden at its most verdant. Flowers bloom in bursts of bright color while the trees are heavy with lush green leaves, creating an organic frame for the little blue house where 114 and West Neck Rd meet. 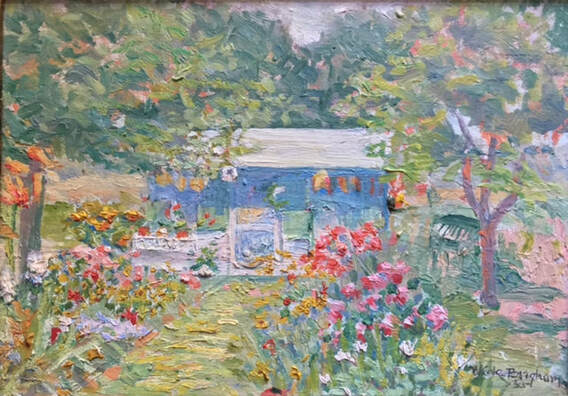 ​Piece Title: Commemorative Medal
Medium: Brass or Bronze
Dimensions : 4.5 cm x 6.5 cm x 0.5 cm
Date Created: 1895
Given By: Elizabeth Auman
A brass or bronze commemorative medal designed by Walter Cole Brigham in honor of Maryland’s participation in the World’s Fair: Columbian Exposition of 1893 that was held in Chicago. The medal notes the years and cities in which Columbus was believed to have been born, sailed for and first landed in the New World , as well as the year of the fair: Genoa 1447, Palos 1492, San Salvador 1492, Chicago 1893. A raised globe sits behind the head and shoulders of a man and over it all perches an eagle, wings spread. On the reverse side ducks, turtles, and oysters wreath the Maryland coat of arms.
​Piece Title: Red Canoe on Louie’s Beach
Medium: Oil on Canvas
Dimensions:
Date Created: 1938
Given By: Arthur Kelly
A miniature painting of a bright red canoe nearly pulled up onto the shore of a crowded Louie’s Beach. Bathers can be seen on the beach and in the water on what must have been a warm summer day. Additionally, two pleasure boats sit atop the blue water of the bay with White Hill in the background. 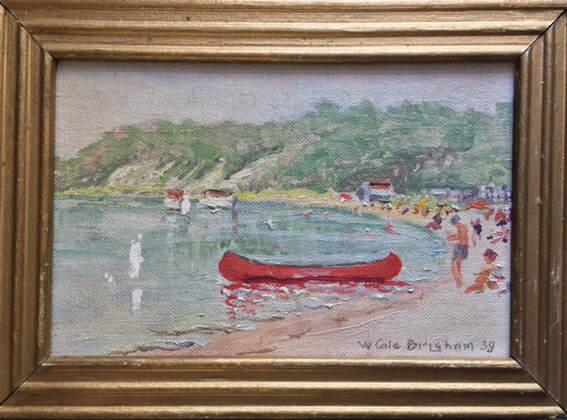 ​Piece Title: Going to the Yacht Club
Medium: Oil on Canvas
Dimensions: 4 in x 5 in
Date Created: 1940
Given By: Sharon Piccozzi Brown
A miniature painting of a sailing vessel entering Dering Harbor under a blue sky. Painted the year before his death, this wood-framed painting is a part of Shelter Island Historical Society’s extensive Walter Cole Brigham collection.

​Title: The Summer Shade
Medium: Oil on Canvas
Dimensions:
Date created: 1937
Given by: Mimi Laspia
A twisted tree in summer green leaning across the sand as if reaching toward the water, a long, gray dock, rocks breaking through the surface of the bay casting small shadows over the tiny lapping waves, and a sky so blue it almost hurts to look at. The final miniature of this exhibit is a showstopper of color and composition, displaying Walter Cole Brigham’s ability with a paintbrush is no less that with glass and seashells, or pencil and paper. 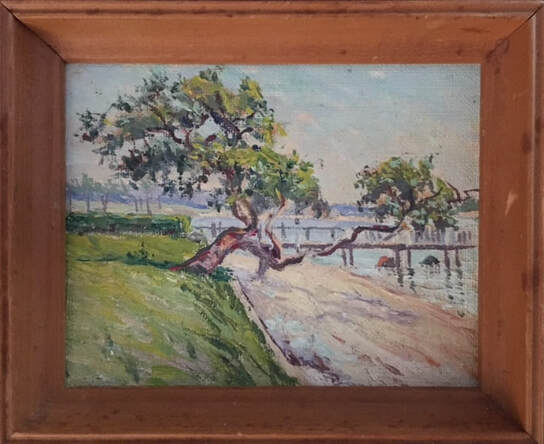 Mary Clerkin Higgins began working in stained glass in 1976 and has worked on masterpieces from the 12th century to the present day for museums around the country, institutions, and private clients. She is a Fellow of the American Institute of Conservation and has been awarded a Lifetime Achievement Award by the American Glass Guild.
Takuji Hamanaka has worked at Clerkin Higgins Stained Glass for 24 years, undertaking many difficult projects. He is also an artist and master woodblock printer. His original work can be found at http://www.kristenlorello.com/takuji-hamanaka-artist-page 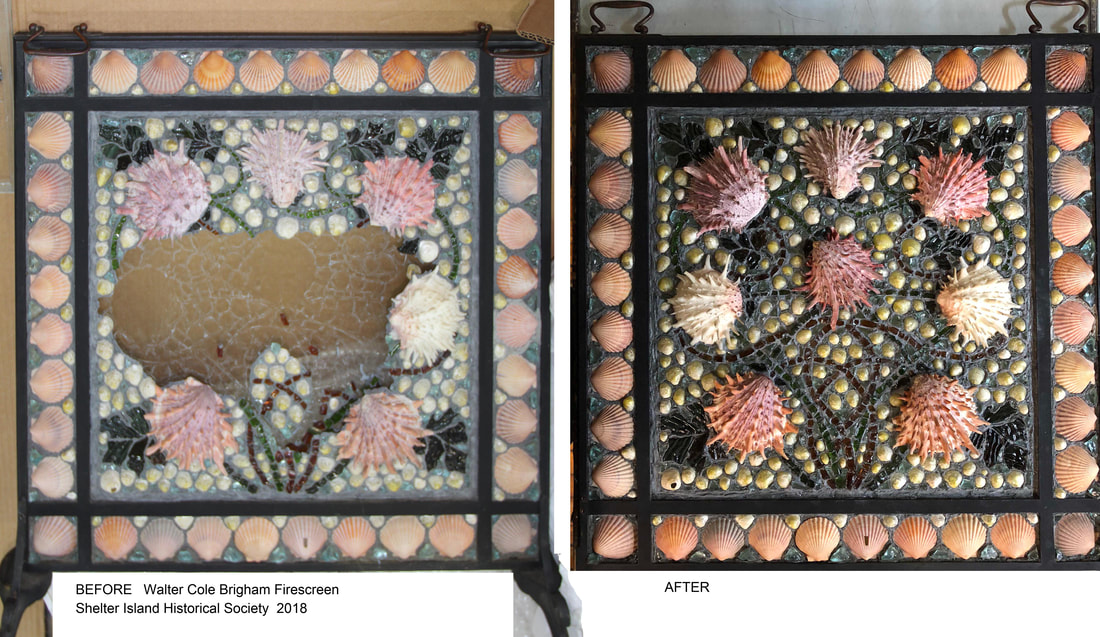